When Hyde Park Cemetery’s former Lodge and entrance arch were bought by Adrian Welch, of Adrian Welch Glass & Glazing, in May 2014, the Lodge was it an extremely poor state. Although a temporary roof had been installed ten years earlier, the stonework was crumbling and the interior was bare. Thanks to Adrian’s vision and substantial investment, the exterior of the Lodge has been restored back to its former glory and the interior is now being fitted out.The arch has been under-pinned and its apex removed to ensure long-term stability. All this has been done within the added constraints of Listed Building status.

In a matter of a few weeks, we understand that tenants will be moving in to the two apartments that have been created in the 1855 Lodge, marking a new beginning for this historic structure. 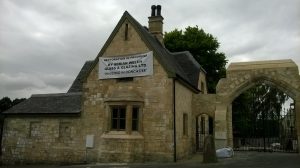