A brief history of English cemeteries

Until the mid-17th century, nearly all the deceased were interred in parish churchyards, although some high status burials took place inside the churches themselves.  By the 17th and 18th centuries it was becoming clear that the Church of England churchyards were becoming full and there began a trend towards the establishment of new cemeteries on the edges of towns, following the example of Nonconformists.  The first burial ground of this type opened in Bloomsbury in 1714.  It was not until 1819 that England’s first public cemetery opened, in Norwich.  However, there was no national movement for cemetery creation and no legislation to allow local authorities to set up publicly accessible cemeteries.

The Metropolitan Interment Act 1850 allowed for the provision of publicly-funded cemeteries in London.  The subsequent Burial Act 1853 extended this provision nationwide.  This led to the growth in cemetery construction by publicly-financed burial boards run by parish vestries.  The Local Government Act 1894 transferred the duties of burial boards to district and parish councils.

Early 19th century burial grounds were often utilitarian, walled enclosures with minimal planting.  However, cemeteries increasingly incorporated the use of designed landscapes.  Inspiration was taken from the Parisian cemetery of Père Lachaise.  This cemetery had a combination of straight and winding paths, a profusion of monuments, and a number of imposing structures set within a carefully designed landscape.  This pattern was followed in England to create a carefully designed, picturesque style.  Subsequently, there was a move back to a more utilitarian layout, often a grid pattern, which provided a more efficient use of land and less grounds’ maintenance.  Many of the cemeteries created after the 1853 Act were planned with a picturesque layout, a grid pattern, or even a combination of the two.  By 1950 most had returned to a grid pattern.

After the closure of St Mary Magdalene’s graveyard in the 14th century and the dissolution of monasteries in the mid-16th, almost all Doncaster burials took place in the 10-acre churchyard of St George’s Church, although some Nonconformist churches had small burial grounds.  By 1842 there was increasing concern about the lack of burial space in the town.  It was proposed to extend St George’s churchyard, but a public cemetery was preferred.

1827-1828 saw a second church built, Christ Church, which had a two acre burial ground.  This did not relieve the problem and by 1850 a report stated that St George’s burial ground was congested.  The situation became worse when St George’s burnt down, and the graveyard was inaccessible for burials between 1853 and 1858.

A scheme for a new public cemetery was under consideration in 1848, but it took six years to get the necessary legislation. The Doncaster Cemetery Act of 3 July 1854 noted that “Whereas the burial grounds in the borough of Doncaster … are so occupied and filled with graves and vaults as to be altogether insufficient for the increased and increasing population … and it is expedient and necessary for the health of the inhabitants … that an additional burial ground or cemetery be provided”.  The Act arranged for a cemetery to be provided, using land belonging to the corporation and funds belonging to the Borough Freemen or “Common Right Owners”, as they are referred to.

The Corporation obtained permission from HM Treasury to appropriate some of its estates for use as a cemetery, namely “Dial Stone Close” and “Carr Side Close” on the south side of the town, in Balby and Hexthorpe Township.  The land was part of Balby Carr which itself was a part of Potteric Carr.

The site lay on the edge of the town, on slightly elevated land.  A map dating to 1666 names the northern edge of the Carr as “Cowhouse Grounds”.  This map also name Green Dike Lane running north of the Carr.  The fields in which the cemetery was to be built were already enclosed by 1785, when they are referred to as “old enclosures”, suggesting that they had been in agricultural production, probably pasture, for some time, compared to the lower-lying Carr ground to the south.

The 1854 Doncaster Cemetery Act stated that the cemetery was not to be constructed within 30 yards of any house of the annual value of £50, or having a plantation or ornamental garden or pleasure ground occupied therewith, except with the written permission of the owner, lessee or occupiers.  The cemetery was to be enclosed with rails or walls not less than seven feet high, and the division between the consecrated and unconsecrated ground was to be marked by walls or rails not less than two feet high.  The Commissioners were to provide all the necessary reception houses, hearses, etc, and not less than half the ground was to be set aside for the interment of the dead of the “Established Church”.  The cemetery was to be constructed within five years of the Act.

Management of the cemetery was to be entrusted to 14 Commissioners, comprising the mayor and six others nominated by the Corporation and seven elected annually by the common rights owners.  The original Commissioners were: from the Corporation, the Mayor, William Claxton; Sir Isaac Morley; William Dunhill; John Hatfield; George Dunn; George Parkinson, and William Marratt.  The seven elected by the common rights owners were John Ward; Charles William Hatfield; Fredrick William Fisher; Edward Nicholson; John Rogerson; James Alexander and Matthew Clerk.

The plots of land were sold by the borough to the cemetery company for £500.  The land previously brought in a rental of £22 per year.

The costs of the cemetery construction were to be partly met by a fund of £1706 3s 10d belonging to the common rights owners.  The sum had been accumulated from the compulsory purchase of common rights lands at the marsh adjacent to Marshgate, by the Great Northern Railway Company, the South Yorkshire Railway and the River Dun Navigation for railway purposes, but which for legal reasons could not be distributed amongst the individual common rights owners.  Additional funds could be raised by selling or leasing the residue of the 2½ acres of the marsh and through a cemetery rate of up to 3d in the pound. 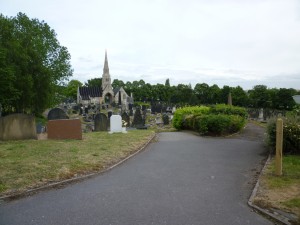 The cemetery was built on a gently sloping site overlooking Doncaster Carr.  The upper part of the cemetery is on glacial sand and gravel, and the OS map of 1854 shows a “Gravel Pit” in the western field with a track running to it from Carr Lane.

Robert James Johnson, an assistant to George Glbert Scott, was the chosen architect.  The chapels and lodge cost £1594, while the boundary wall, exclusive of palisade, cost £1158.  The work was carried out by Messrs Anelay of Doncaster.

The cemetery opened in January 1856. It had gently curving walks on the upper part where the most expensive plots (1st and 2nd class) were located.  The lower half was divided into three sections for 3rd class burials and public burials.  Graves reserved for Dissenters were separated from those of the Established Church by a broad north-south walk, being the three plots at the eastern end of the cemetery that occupied about a third of the ground.  There were plots for flowers and shrubs, the cemetery being planted with 4,000 weeping and drooping trees, shrubs, evergreens, cedars and roses.

In September 1872, the Cemetery Commissioners had to consider extending the cemetery, as there were only 12 vacant plots remaining in the ‘guinea graves’.  In 1876 the Town Council offered the two adjoining fields to the west at £350 per acre, but this was turned down as being too expensive.  It was also stated that the recent removal of gravel from the field had “much deteriorated the ground for cemetery purposes”.  An agreement was finally reached, and the new western extension was opened in 1882, giving an overall area for the cemetery of 15 acres. A plan of 1880 shows the land to be taken in, with the western edge of the cemetery now being defined by New Street.  This new area was to be laid out in a combination of rectangular sections to the south, and less angular plots to the north, in line with the original design.  A new entrance was formed off Green Dyke Lane through the northern wall.  It is this extended cemetery which is depicted on the OS map of 1892, while the later 1903 edition shows that the north-western part had been redesigned into a more rectangular pattern, which persists today. 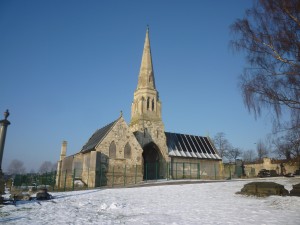