Last night’s Bat Walk at the cemetery attracted about two dozen people, including several children, and the bats put on a wonderful show! Almost immediately after the walk began, Common Pipistrelle bats were seen and detected, using the special bat detectors brought along by South Yorkshire Bat Group. There detectors picked up evidence of what may be another bat species, too, but that needs to be checked out by walk leader and SYBG member Robert Bell. We shall let you know if it proves to be a species not previously detected at Hyde Park Cemetery.

Thank you to everyone who came along and especially to Robert for providing the expertise and the detection equipment. 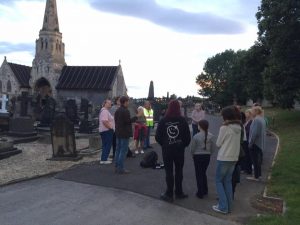