There was a small but enthusiastic audience in attendance at last night’s Open Meeting and AGM. They enjoyed an excellent talk by Victoria Ryves and Vicky Siviter, from the Doncaster 1914-18, At Home, At War project, including hearing some fascinating stories of Doncaster people’s extraordinary actions during WW1. There was the man who died in action only hours before the Armistice was declared, the soldier whose life was saved when his metal cigarette case stopped a bullet aimed at his heart, and the small dog who was smuggled back to Doncaster from the Western Front after the war ended and survived a further 16 years at his Wheatley home.

Following a break for refreshments, Helen Slade, FoHPC Secretary, presented the group’s comprehensive annual report. Margaret Bark, Treasurer, then presented the 2015/16 accounts.  Finally the officers and committee were elected for the coming year, including the election of Andria Johns to the position of Chairman. 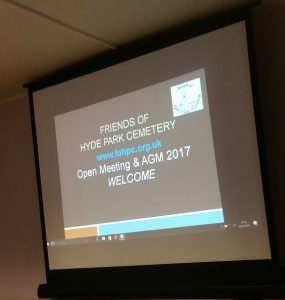