The stone and brick wall at the western end of the cemetery is in need of repair, mainly as a result of damage caused by the roots of the Black Poplar trees that were removed in 2014. Doncaster Council is intending to rebuild  parts of the wall and repair the rest, where necessary, later in 2016. In parallel with that scheme, the Friends of Hyde Park Cemetery are intending to install some new sections of railings. The original railings were removed from the New Street wall longer ago than anyone can remember. Funding for these railings will come from generous private donations.

We are in discussion with the local Conservation Officer about a suitable design, due to the railings needing Listed Building Consent. As part of that process, we recently made a timber mock-up of part of the proposed railings, to view on site. You will see a picture below. We shall keep you informed of developments. 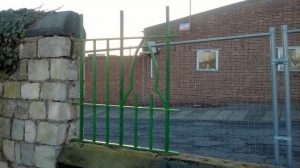