Doncaster Council have recently carried out resurfacing of many of the footpaths in Hyde Park Cemetery, for which we and the cemetery’s many other users are very grateful. Some of the other paths were not only in very poor condition, but were also very little used. In consultation with ourselves and to reduce future maintenance costs, Doncaster Council decided to remove some of those little-used paths and to soil and seed them instead, so that they will become lawned areas. In the large majority of cases, the Friends agree with and approve of the decision. However, there is one section of perimeter footpath (about 50 metres long) which has been removed, against our recommendation. It lies in the south-western corner of the cemetery, between Sections Ux/Vx and X. The gap created by removing this portion of path leaves a gap in the perimeter footpath, which we believe is very detrimental to users. We are making representation to Doncaster Council on this matter.

The current arrangement of footpaths is shown on this revised cemetery plan.

Below is a picture of the former path between Sections Ix and Ox, now soiled and seeded. 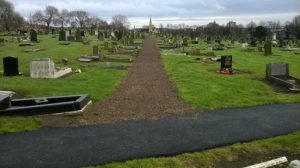